Decorative lighting for log and timber homes is a little tricky because wood walls and ceilings tend to absorb light and make rooms darker.

There is a good reason that log homes seem darker than other homes. Log walls and wood ceilings actually absorb up to 50% of the light in the room. The darker the walls, the greater the absorption.

But, never fear. This is not a lost cause. With a little ingenuity, you can use lighting to create drama, intimacy or coziness in each of your rooms—depending on the effect that you would like.

To avoid feeling like you are in a cave, you can add several sources of light in each room. It’s important that you don’t rely on just one light source in a room. A single central overhead light in a room produces glare.

In order to accomplish this, you’ll need a reasonable amount of general or ambient lighting, and a few other sources of light, for tasks like reading a book or preparing meals in the kitchen.  And don’t forget to include lighting that highlights special items in your room.

Here are some ideas to help you get started:

Use fluorescent lights under the cabinets to help you prepare meals.  In addition, many people also like a large fluorescent light overhead in the kitchen. However, don’t depend on a central overhead light for all your lighting. The reason for that is that you will always be working in your own shadow, if the only light in the kitchen is in the center of the room overhead, .

You’ll need to have task lighting over your sink, under the cabinets, over the stove and anywhere you will be performing tasks. This is for safety, as much as for comfort.

Vary the heights of lighting in your home. This adds interest and help to illuminate more areas in your room. Sconces give you light at eye level, breaking up tall walls and adding interest. 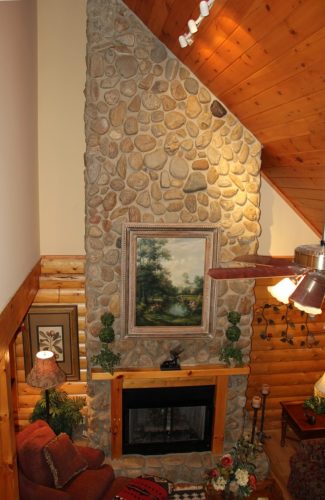 Task lighting is not just for the kitchen. If you place table lamps or floor lamps beside chairs, you will provide areas for reading or knitting. Overhead lighting can provide lighting for a game table or pool table.

Using small lights to highlight special paintings or prints draws your eye to the wall, and it also add interest and some light to your room.

Use chandeliers in special areas, like the entry to your home, the main sitting area in the great room or over the dining room table.  Chandeliers are impressive and provide interest.  And many can be dimmed to provide ambience.

Use these lamps where you won’t be bumping into them, with your head. Over an island or the stove in the kitchen are two possibilities.  Decorative pendant lights serve as task lights, illuminating a small area underneath them.

Using decorative home lighting in a log home is not difficult, but you will have to put your thinking cap on and get a little creative. And, in doing so, you will find ways to really show off the beauty of the wood, in your log or timber frame home.

Choosing rustic ceiling lighting is an important part of outfitting your cabin, log home or lodge.

It seems so simple, but picking the best rustic ceiling fans and lighting for your home can make a huge difference in the ambience of your cabin or lodge.

Ceiling lighting is most often used in bathrooms, kitchens, hall areas and bedrooms.  They need to be installed by the builder before your home is completed.

Authentic deer antler chandeliers are made from real deer antlers that have been shed naturally by animals in the fall.  Because antlers are found on the ground in the woods, no animal is hurt or killed to use their antlers.

In other words, antlers are a renewable and sustainable resource.

On the other hand, some people prefer to get faux deer antler lights.  To fill this need, companies have developed faux antlers made of resin that are lighter and less expensive than authentic antlers.

How did Antlers get into Lights?

The use of deer antlers goes back thousands of years.  For example, ancient Chinese physicians used ground antlers in their tonics and medicines for healing.

On the European continent, medieval Europeans started making antler candle holders.  From there, the transition was easy.

For centuries, European castles in Great Britain and Germany proudly used antler chandeliers in their grand rooms.  The chandeliers were dramatic and elegant—fit for a king!

Today, here in America, you often see a deer antler chandelier or an elk or moose chandelier featured in great rooms of rustic resorts.  We also see them in high end restaurants, in timber frame lodges and, of course, in large log hunting cabins.

If you are thinking about using a large chandelier in your new home, here’s a tip to make things easier for you.  Decorative lighting fixtures like chandeliers should be purchased before your home is built, especially if you are building a log or timber frame home..  Installation becomes much more difficult after a home has been finished.

What’s the difference between Mule Deer and Whitetail Deer?

At first glance, these two deer look pretty similar.  In fact, many new hunters have difficulty telling them apart from a distance.

Both deer can range from 80 pounds to 400 pounds, with mule deer tending to be a bit larger.  Here’s another interesting fact.  Whitetail deer tend to be larger in New England and smaller as you go south.

You can even get lamp shades with deer, moose, bears, elk, trout or painted pine cones on them.

Of course the most important thing to consider is whether a lamp or light fixture will look good in your home and provide light where you need it.

But, don’t forget that a pretty lamp shade has its own appeal and it is the finishing touch for a beautiful rustic lamp.  The rub is that, often rustic lamp shades only come with a lamp and cannot be purchased separately.

Of course there are different types of lamp shades for rustic cabins and lodges. Some have a wildlife theme while others tend to be more western or just simple and rustic.

Choosing a lamp shade type will depend on your country style or décor and the theme that you have chosen.

Mica lamp shades shine with elegance. They are usually hand made and they have an interesting natural texture. You can use mica shades with both western and rustic décor.

Remember the old pie cupboards with the punched tin decorations (that let air circulate in the cupboard)? Metal lamp shades have an antique look and are also rustic lamp shades. They bring a unique sparkle to a room, with a touch of magic. You can get metal lamp shades in different metals: copper, tin and painted black metal.

Some of the cutest rustic or country lamp shades are hand painted with themes like deer, pine cones, trees, horses or moose. If you have a specific theme for your log or timber home, you can probably find lamp shades to match your them. And many of them are hand painted by famous artists!

In conclusion, choosing the perfect lamp or decorative lighting fixture for your home is only half the battle. You need to make sure that the lamp shades that you choose are complementary to your lamps and work with your theme.

Shop by Category or General Theme

Didn’t find it yet? Try a search…